I asked myself a question:  "Are there reefs in Cuba?"

I really meant, are there reefs around Cuba.  This is one answer I found:

Cuba has more than 3,000 miles (4,800 kilometers) of coastline, four primary reef systems (each of which is about equal to or longer than the Florida Keys), and more than 4,000 islands, islets, cays, humps, lumps, and spits. From conversations with Cuban scientists and environmentalists who have been working for more than ten years to develop a comprehensive, sustainable marine conservation program, I knew that many of the reefs were severely stressed.

That's kind of good news/bad news, isn't it.  Lots of reef, but severely stressed.  Sounds like the reef around Key West, so we share that problem with our neighbors.  Then I asked myself, what are the Cubans doing to protect their reefs?  Are they good stewards?

Among the areas that are being protected is a patch off Cuba's southeast coast of roughly a thousand square miles (2,590 square kilometers) of reefs, mangrove swamps, and islands unnamed and named—Cayo Caballones, Cayo Cachiboca, Laguna de Boca de Guano, and so on—that is known collectively as Jardines de la Reina, or the Gardens of the Queen. It is a sedulously guarded marine sanctuary, off-limits to all but a few Cuban lobster boats and a handful of foreign divers and light-tackle fishermen.

And they have marine sanctuaries too, that's another point of commonality.

I used this picture the other day in a different context: 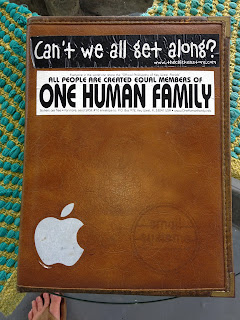 But there are two of the messages that we try to live by.  I tend to think that many people, in Key West, in Cuba and in the world are something like me (and you).  They want to live their lives, enjoy the fruits of their labors, be free from getting hassled ... well, you get the idea.  They want what we want, most of them.  Its that old "do unto others" thing.