A Cuban Blog by an American

I came across this blog somewhere and have added it to my blogroll.

Charles, the blogger, went to Cuba and fell in love with it.

There are some nice videos to watch.

Check it out, señor/a/ita.
Posted by Robert Kelly at 3:37 PM No comments:

NAS Key West is a major Naval facility here in Key West.  It's importance to the economic well-being of Key West and the lower Keys is large.  In addition, the U.S. Army maintains its Special Forces underwater training base here, and the U.S. Coast Guard also maintains a significant complement of forces here as well.

A large measure of what goes on here involves training  -- fighter pilot training, Special Forces training, and more.  The expenditure of Federal dollars in the Keys is in the many millions, and much of it flows into  City, County and State coffers in the form of salaries, local expenditures for infrastructure services, and sales taxes paid by the military and civilian workers who make up a significant portion of the local population.


But it's almost a foregone conclusion that the military budget will be reduced to a smaller portion of the American economy, as wars wind down and dollars are shifted to areas of greater needs and more productive uses of our national investment capital.

The overall impact of the Navy and its allied branches on the Key West economy is much larger than that of the cruise ships that ply the harbors here.  It might well be time for City leaders to contemplate the impact of a diminished military presence here.  The last time it happened, the City was left desolate and broke.  If it happens again the results, although perhaps not as dire as those of the 1970's, will be felt throughout the Keys.

And, lest it seem as if I'm arguing on behalf of the military leaders, let me point out that they are describing the effect of budget cuts, and it appears to me that they are really saying that its the failure to fund budget increases that will impact its missions.  I'm all for a strong military defense capability.  Not such much for wars of adventure.  We should NOT be the world's police.

Remember old Ike and what he said about the military-industrial complex?  No doubt that Chuck Hagel does.

You may say I'm a dreamer, but I'm not the only one.
Posted by Robert Kelly at 1:58 PM No comments:

Here's a blog that gives insight into the travel experience within Cuba.
Posted by Robert Kelly at 10:41 AM No comments:

This Year in Havana

Listening to Cuban music from my iTunes library today, and investigating how we might spend some time in Cuba this year.

Our goal is to be able to travel to different parts of the country and to meet and get to know people there who are interested in some of the things we are interested in.  Music, dance, history are at the top of the list.  We aren't particularly interested in joining one of the many tour groups that have been and are being organized to comply with OFAC's restrictions.  For one thing, they are expensive and for another they are conducted as guided tours, with little opportunity to engage the average people of Cuba, people like ourselves. 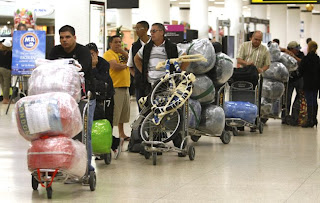 Americans, those who don't have relatives in Cuba at least, still aren't free to travel to the neighboring island without restriction, due to the regulations imposed by the Office of Foreign Asset Control, under the U.S. Treasury Department.  Those with a Cuban family connection, on the other hand, are permitted to travel there with some regularity and to bring large amounts of U.S. goods with them, as the picture here shows.

There are scheduled charter flights from several U.S. airports, notably Miami and New York and Los Angeles.  And more recently, OFAC licensed eight additional airports, none of which are from the closest airport of all, Key West International.  I've toyed with the idea of traveling there by boat, but I don't any boat owner or captain who'd risk the loss of their vessel to confiscation or the imposition of large fines.

I've been told that it's possible, and quite easy to go to the Bahamas or Mexico and catch a flight from there, and I know of those who've done it.  I know someone here who can put us in contact with a family offering lodging, meals and transportation at what seem to be very affordable prices.

Our primary objective this year then, will be to go to Cuba on our own terms and to get to know something about the neighbors next door.  It would be even better, in fact to do that with friends from Key WestAnd so the title:  this Year in Havana.

Do let us know if you're interested.  We can get some folks to tell us how best to do it.


Posted by Robert Kelly at 3:56 PM No comments: